How do we test for something we cannot always see?

Some folks still do it the old-fashioned way: make the assembly, plug it into the product and see if the product works. This is known as functional testing. Is there a cost in doing this?

A company that makes surveillance equipment for military and homeland security contracts a supplier to build a wire assembly for a $100,000.00 gyroscopic camera. The camera has lasers, night vision, HD Video, anti-shake, and 360-degree viewing. Mounted to a UAV or helicopter, it can find a fugitive hiding in a ditch or a lost child on a mountain top at night, chilled to the bone.

When the harness was plugged into the array of camera sensors and equipment and powered on (functional testing), smoke billowed out and it became apparent that the assembly was bad. As it turns out, the laser in the camera received the wrong voltage because a connection had been miswired to a higher-voltage supply line. The cost of this single electrical wiring error was--you bet--$100,000.00. Although functional testing is an important part of the process, it should NOT be the first part of the process, as we have just seen. 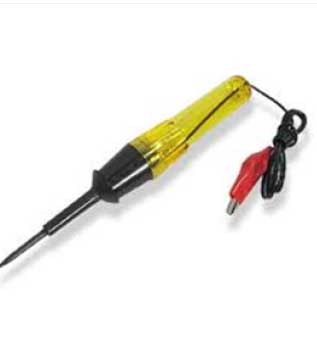 Most of us are familiar with handheld electrical circuit testers because they are used by electricians everywhere. An electrical circuit tester is a handy, cost-effective tool that allows you to see if electrons are flowing. Some of these are handmade with a 9V battery and a speaker that buzzes or beeps (beep box) so you can hear whether or not there are any electrons present. Some have a light (light probe) that illuminates when a connection is detected. A handheld tester cannot tell you how many electrons there are, it simply lets you know if they are flowing--which is still a step up from the total lack of testing in the above example.

The problem with this device is that the more complex the assembly, the less effective a handheld probe tester is. A few wires such as those found in a trailer harness would be fine, but take a harness that is more complex.

It would take one or two people several hours to probe a complex harness using a handheld electrical circuit tester, and they would have to probe very carefully over every single circuit. They would be able to learn if the electron current flows to the places designated in the schematic, thus providing a decent continuity test (a continuity test is the testing of an electric circuit to see if current flows). If electron flow is inhibited by broken conductors, damaged components, or excessive resistance, the light on the handheld device won't turn on or the speaker won't beep. This indicates that the circuit has an “open.” This method typically misses shorts and most miswires.

This method of testing is the way it has been done in the past and is sometimes still done today. The cost is low and the man power is high, but at least it is better than the “Poke and Hope” method of a functional test.

The galvanometer was a revolutionary instrument originally devised in 1820. It was improved to become a field-capable device in the 1920s by a British post office engineer who wanted an improved multifunctional tool to troubleshoot phone lines. This handheld device is known today as a digital multimeter. It not only detects electrons, but also measures "electrical" quality, which is based on one of three factors:

This tool has the same two leads (red and black) as the beep box or light probe we discussed earlier. It has a beep mode and one or two people can measure the flow of electrons through the wires of the device-under-test.

This device is still used heavily today and is the de facto cable tester. 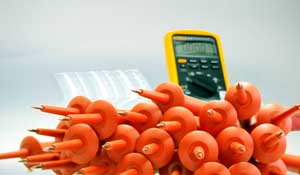 Digital Multimeter + Schematics + Human = Semi Automated Electrical Tester
Using semi-automated electrical testers greatly improves the quality of electrical connections. However, the more complex the assembly, the slower and less accurate these testers are. Fatigue, human error, and time become limiting factors.
If it takes two people 30 seconds to look at the schematic and probe the circuit points to make sure it is correct, then it will take them 50 minutes to probe 100 points (not including the time it would take them to record the results). This goes without mentioning how tired they may become mentally and physically during the process. Furthermore, what if there is a short or a miswire? A digital multimeter only has two leads and therefore the tester can only check two points at a time. In order to find the fault, the workers would start by probing the first of the 100 points that are supposed to be connected. Then, while probing this point, they would have to take the other lead and probe each of the 100 points that are not supposed to be connected. The workers would then probe the second point that is supposed to be connected and again probe each of the remaining points that are not supposed to be connected, and so on.

It's time to calculate how many measurements or "probes" the workers have to make. This sort of calculation is called a permutation. To calculate the number of permutations required in our scenario you would use the equation

different possible measurements that you would need to make. At 30 seconds per test this would take nearly 41 hours! This is a very common practice for testing low-volume harnesses. While it is time-consuming it can be, and is, done regularly. However, for a very large and complex harness you could be talking several weeks' worth of probing, and we have not even begun to talk about checking for insulation integrity yet!

Imagine a new kind of tester--a digital multimeter that has hundreds, if not thousands, of test leads coming out of it. The tester has a switch inside that allows each lead to alternate between + and -.

Now, instead of having to manually probe your circuits two points at a time, wouldn't it be nice to take your schematic and load the diagram data into the tester? This way, you can take those measurements without even needing to be there. What's more, there won't be any operator fatigue, and you will get more consistent results. In addition, your tester can check those 10,000 points (as mentioned in above) in seconds because it is able to measure more than two points at once. Since you're measuring the voltage, resistance, and/or amps, go ahead and have your tester record these measurements and print a report. Too much to ask? Nope! Such is the power of automated testing!

So why use handheld digital multimeters at all? Well, as you build an assembly you might want to make sure the wires are able to conduct electricity. Or, you may need a multimeter to troubleshoot a circuit that an automated tester deemed as bad. Additionally, some assemblies simply do not justify the cost of manufacturing the mating connectors that plug into Cirris' automated tester. If you're assembling something simple like a refrigerator or a dishwasher, placing the wires in the correct place may be all that matters. In situations like these where measurements and data are not required, a multimeter can still produce good results.

Cirris Systems provides automated electrical testers that perform low and/or high voltage tests on cable and harness assemblies—of all sizes and for all industries—in a matter of seconds. These testers will not only diagnose cable and harness errors such as opens, shorts, and miswires, but they will also indicate the location of the error. Cirris testers also test assemblies with components, including (but not limited to) resistors, diodes, capacitors, LEDs, switches, and twisted pairs.

Many Cirris products utilize advanced software that offers many capabilities, such as: