An Introduction to A-620 Cable Testing Standard

None of the information on this page is a substitute for having a copy of the A-620 Rev B standard. This information is intended to help guide you in understanding why specific tests and their required parameters are needed. 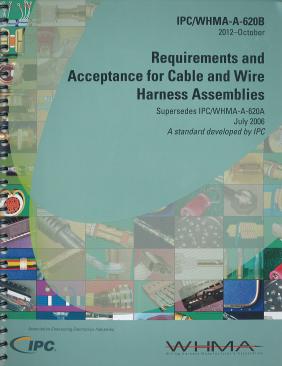 The IPC/WHMA-A-620, Requirements and Acceptance for Cable/Wire Harness Assemblies is a joint project of IPC (Institute of Printed Circuits) and WHMA (Wire Harness Manufacturers Association). Originally released in 2002, the IPC/WHMA-A-620 has become the industry standard against which to measure quality.

The A-620 describes requirements for assemblies based on visual criteria. Detailed pictures communicate acceptable and unacceptable features of an assembly. In this way it provides a way to train factory floor people. It also sets expectations between customers and suppliers for the level of quality expected. You can purchase the current version (A-620 Rev B) at whma.org or ipc.org

What Has Happened with Cable Testing in A-620?

The A-620 was released in 2002 without a "Test" section. Cirris worked with other WHMA and IPC members in creating the test section (section 19), which became the major change in the A-620 standard (Rev A released in July of 2006).

In 2011, Cirris helped propose changes to the test section for the next edition of the A-620  standard (Rev B released in October of 2012). Further details of these changes can be found at the bottom of this page.

The Test Section uses three product classes, as defined in section 1.8 of A-620, for assemblies based on their intended use:

Includes products suitable for applications where the major requirement is the function of the completed assembly.

Includes products where continued performance and extended life is required, and for which uninterrupted service is desired but not critical. Typically, the end-use environment would not cause failures.

Includes products where continued performance or performance-on-demand is critical, equipment downtime cannot be tolerated, end-use environment may be uncommonly harsh, and the equipment must function when required, such as life support systems and other critical systems.

Use of this standard requires agreement on the classes to which the product belongs. If the User and Manufacturer do not establish and document the acceptance class, the Manufacturer may do so. Accept and/or reject decisions shall be based on applicable documentation such as contracts, drawings, specifications, standards and reference documents. (A-620, section 1.8)

Cirris understands these classes to be defined as follows:

A-620 Rev B Guidelines Summary

The table below shows the necessary test for each category of products.

Some Questions You Might Have About The A-620 Test Requirements

The DWV test has a "minimum" time and IR has a "maximum" time. Shouldn't they both be minimum times?

The Dielectric Withstand Voltage test (DWV) identifies a sudden breakdown in the insulation between conductors. This test must continue for some minimum time. The same maximum-allowable current threshold is used throughout the test time. Longer times have better chances of detecting faults.

The Insulation Resistance test (IR) detects a more consistent current flow between insulated conductors, stated as a resistance, by factoring in the applied voltage. When the voltage is first applied, the current usually peaks and then, due to humidity that might be dried out by the energy of applied voltage and something called "dielectric absorption", it trends lower over time. This means that the measured resistance starts lower and trends higher over time. The longer you apply the voltage, the better the final measured insulation resistance, so longer times allow cables with worse IR performance to pass. To shorten production test time without degrading the test, the IR test time ends as soon as the minimum resistance value is reached.

In Class 2 cables, why are high voltage (HV) tests required for close spaced contacts (<2 mm [0.079 in])? This seems backwards since the closer the spacing, the lower the voltage a connector is likely to be able to withstand.

It is true that smaller gaps between isolated conductors result in lower breakdown voltages. They also increase the chance of an intermittent or latent defect in the form of a short. With creepage distance >2 mm the likelihood of finding near-shorts with high voltage tests was not thought to offset the cost of the more rigorous HV tests that would be required.

In Class 2, just as in Class 3, small creepage distances can justify a reduction in the voltage applied for the high voltage test. The A-620 requirements specify that electrical tests should operate at such levels as not to degrade the electrical properties. However, the need for a good HV test increases as the spacing gets smaller. The costs of the testing should not increase when the voltage needs to be reduced. As a guide, you can see what problems you might encounter with your particular creepage distance using the Arc Gap Calculator.

I have insulated wires or connectors with a specified maximum working voltage that is lower than those required in the A-620 test specification. Will these test voltages damage them? Am I caught in a double bind where these required test voltages are considered destructive and render the assembly unusable for service?

This question most often arises from those doing work under military contracts where interpretations for different requirements may conflict. If you have a reason to believe that testing will degrade your assembly, then you may want to perform some confirming tests and make use of a provision of the test section that requires electrical tests on good assemblies to not degrade reliability.

We are not aware of any research or proof that the insulation used in good assemblies can be degraded by high voltage during brief applications in the IR and DWV tests. Here are some sound reasons why this is not considered a risk:

If you become aware of research that supports the fear of degrading insulation in wiring or connectors with the short-term application of high-voltage, we would deeply appreciate knowing of it.

The following changes were implemented in A-620 Rev B:

The following words were added,

The following paragraph was added,

“On points to be tested, harnesses shall […]be tested for DWV for all isolated continuity paths as defined in continuity tests. Conductive connector shells and unused contact positions shall [N1D2D3] be included where a risk of a short exists.”

The following note was added,

Note 2: Voltage Level is applicable when clearance distance tested is ≥0.58 mm [0.019 in] an agreement between the User and Manufacturer to de-rate these test levels would be expected.

The following paragraph was added.

“On points to be tested, harnesses shall be tested for DWV for all isolated continuity paths as defined in continuity tests. Conductive connector shells and unused contact positions shall be included where a risk of a short exists.”