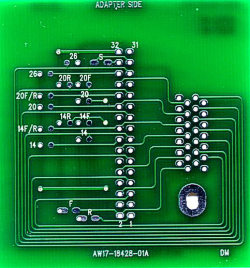 The "strapping points" displayed on this adapter board play a role in Signature code generation for adapters.

Cirris cable testers use a mathematical algorithm to derive a six-character "Cable Signature" for each learned wire lists. Although the details of this concept are incomplete without a long discussion of the math, you will find below a "basic" explanation of how signatures are derived.
Each test point used in a wire list is assigned a prime number. After the wire list is generated, "learned" by the tester, the prime numbers of the test points used in that wire list are added up. This results in a unique "signature" for that wire list. Thus it could be expressed that, the signature of a wire list, is the "sum of the prime numbers". In addition, the algorithm adds into this mix the unique signatures of each adapter used in the wire list as well as their position on the tester. The algorithm uses a hexadecimal numbering system which is why signatures consist of digits (0 - 9) and letters (A - F).

Adapter Signatures?
Adapter signatures are generated using a similar algorithm. The number of position in the connector, the gender of the connector and how the strapping information on the board is configured all play a role in the generation of these unique adapter codes.