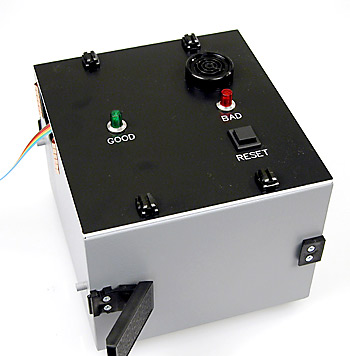 The Cirris Alarm Box is designed to sound a sonalert alarm whenever a bad cable is detected during the testing process. In addition to the high pitched alarm, a red light comes on. The person doing the test must remove the bad cable and press the reset button (or turn the key if using the optional Key Reset) to silence the alarm and prepare the tester for the next cable to be tested. 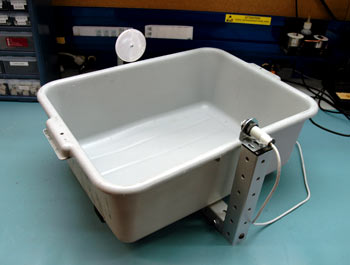 A new video that outlines bin alarms and how they work

It is interesting to note that the 'Continuous Performance Tests' described above are used to detect problems with Attention Deficit/Hyper activity Disorder (ADHD) in children and adults. This test has a fascinating application for cable manufacturers. The special design of a 'continuous performance tests' looks very much like a poorly designed production test environment. A manufacturing facility typically has a failure occur (infrequent behavior sequence) less than one in every 20 parts but the facility operates for 8 hours each day, day after day, week after week (frequent behavior sequence). On the other hand, the ADHD test process usually lasts only a 1/2 hour or so. It is interesting to note that if psychologists can determine if a child or adult has ADHD in a 1/2 hour of experiments with two similar, but different, sequences of behavior, you can readily see how weeks and weeks of the same repetitive behavior in your facility might cause your test people to pass a bad cable as a good one (even if they do not have ADHD!).

What can you do?

Some strategies for 'interrupting' our typical response to repetitive testing would be to change the job design (adding more steps to the test process to make the work more engaging and the pattern less repetitive). You can also use hardware which has both auditory and visual fail indicators which helps to stimulate the attention of the test person (see alarm box on left).

Using a 'Bin Alarm' can add another level of automation to prevent defective cables from being shipped to your customer. The concept is simple and easy to implement. A photo electric sensor and reflector are mounted on the bad cable bin so that the infrared beam will project across the mouth of the bin. Whenever a bad cable is put into the bin the infrared beam is broken. When the beam is broken, a signal is sent to the tester indicating that the defective cable was put into the bad cable bin.

In order for this idea to work there must be communication between the tester and the sensor. Cirris has developed a 'script' that sounds an alarm whenever a bad cable is detected during a test. Only by placing the bad cable in the "bad cable bin" will the alarm be turned off and the tester returned to testing. This approach helps to break the 'frequent behavior sequence' and alerts the test person that they have to deal with a problem. If the bad cable never breaks, the beam on the bad cable bin, followed by the tester, continues to sound the alarm and will not allow more testing until the beam is broken. 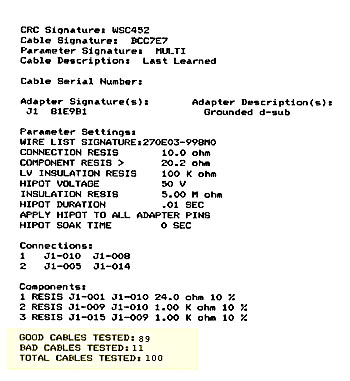 Another way to confirm that all your cables have been tested is to enable the "Count All Cables" option.

Once the analyzer (1000RX, 1000R+, 1000H+, 1000HN) is programmed with a valid test, and you have begun testing cables, the analyzer will begin to count each cable that you test (the count is incremented when you remove the cable after a test).

The example printout shown on the left is from the Touch 1 analyzer and shows the number of bad cables tested also. The new 1100 series testers (1100R+ and 1100H+ as well as the Touch 1) also include the bad cable count as part of the test report.

Using this option gives you a number you can check your actual cable count against. 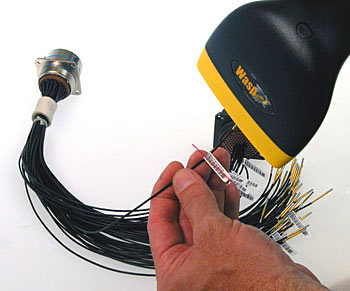 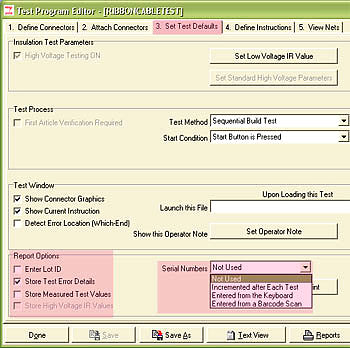 Bar code scanning, serialization of cables, application of labels to all tested cables and SPC data collection are all strategies to help solve the problem of bad cables slipping pass your test people and being shipped by mistake to your customer. The additional benefit of course is these methods enable you to verify to your customers that all testing was done prior to shipment and the cables shipped now have a paper trail which can be of great benefit to your business if quality issues arise at later dates.

Cirris encourages our customers to implement SPC (Statistical Process Control) data collection programs to not only give you the information you need to improve your manufacturing processes, but it has the additional benefit of giving you a undeniable paper trail for each cable you manufacture. This focus on quality reporting is fast becoming the 'gold standard' in the cable manufacturing industry.

Cirris makes it easy to serialize your cables and to collect all Test data for your test reports. The screen capture to the left shows a windows screen in the easy-wire software. On Tab 3 in the easy-wire program editor window, you simply select the method you wish to use to generate or capture serial numbers by checking the box of your choice. The same is also true for collecting SPC test data (far left). Check the boxes that apply for the information you wish to collect and the software takes care of the details.